EEOC At 50: A Suggestion For Renewal 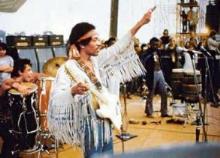 “Said, I'm going down to Yasgur's Farm
Gonna join in a rock and roll band
Got to get back to the land and set my soul free”

Last month the EEOC turned 50.  It opened its doors on July 2, 1965 and for the last 50 years has been responsible for enforcing Title VII and other laws assigned to the agency (notably, the ADA, but also the ADEA, the EPA and the GINA).  The EEOC’s commitment to civil rights in the workplace is undeniable.  In dealing with the agency I consistently encounter smart and sincere people who want to do right.  We are a better nation for having this admirable agency and sincere birthday wishes are definitely in order.  Happy 50th, EEOC.

At the same time, reflecting on the EEOC’s anniversary put The Bullard Edge in the mind of Joni Mitchell’s song “Woodstock” (covered by Crosby, Stills Nash & Young on Déjà Vu in 1970).  The late 1960s were a tumultuous time and Ms. Mitchell saw the festival as a moment of hope for renewal and for return to purpose.

Today, the EEOC could use a moment of renewal and return to purpose.  It needs to get itself back to the garden.

As recounted on the EEOC’s website, “Title VII of the Civil Rights Act of 1964 also create[d] the U.S. Equal Employment Opportunity Commission (EEOC), a five-member, bipartisan commission whose mission is to eliminate unlawful employment discrimination.”  The agency elaborated on this historical mission.

“On July 2, [1965] Title VII bec[a]me[] ‘the law of the land’ and EEOC open[ed] for business with a budget of $2.25 million and approximately 100 employees, many of them detailed from other federal agencies.  EEOC's primary responsibility is to receive and investigate charges of unlawful employment practices, determine if reasonable cause exists to believe the charge is true, and if the agency determines there has been a violation of law, to attempt to reach a voluntary settlement through conciliation.”

Over the years, the EEOC has worked to enforce many of the nation’s employment laws.  The agency has promulgated regulations implementing statutes and has issued various Enforcement Guidances helping stakeholders to understand the statutes and the agency’s enforcement positions.  The high point of this work, in my view, related to the EEOC’s implementation of the ADA (also celebrating a significant birthday this year.  Happy 25th, ADA.)

However, the EEOC of 2015 has lost its way.  Undeniably, on occasion the agency still takes appropriate and successful actions (see our Bullard Alert regarding the United States Supreme Court’s June 1, 2015 decision in EEOC v. Abercrombie & Fitch Stores, Inc., a religious discrimination case).  More often, though, the agency is overreaching, incorrect and impertinent.  Consider, for example, last summer’s EEOC Enforcement Guidance on Pregnancy Discrimination and Related Issues, much of which summarized existing law.  The agency did not stop there, though.  In a reversal of its previous statements, the agency for the first time stated that an employer must provide light duty for pregnant workers on the same terms that light duty is offered to employees injured on the job who are similar to the pregnant worker in their ability or inability to work.  The EEOC took this action despite the fact that a case then pending before the US Supreme Court involved that very issue.  The Bullard Edge immediately flagged the EEOC for this and in March the Supreme Court severely scolded the agency for issuing guidelines without following appropriate procedures and without thoroughly considering the matters on which guidance had been issued (read our account here).

The Bullard Edge is not going to pretend to prescribe a cure-all for the EEOC’s shortcomings.  Rather, we are going to propose that the agency begin its journey back to the garden by addressing three areas where immediate improvement is needed.

First, stop behaving like the world’s best funded plaintiffs firm (EEOC’s 2015 budget is $364,500,000).  On its home page, the EEOC devotes more space to recruiting plaintiffs than to any other endeavor.  The message sounds like a bad late night television commercial.

“The EEOC currently has a number of on-going lawsuits and settlements of lawsuits.  We are looking for people who may have been affected by the unlawful discrimination alleged in these suits.  Please read the list below for the name of the company, the type of discrimination, and the basis of the action, and follow the link for each case to learn more.”

The agency follows this message by offering a menu of seven ongoing lawsuits.

Second, stop issuing non-substantive press releases regarding allegations.  The EEOC uses its “Newsroom” link to bully employers.  Occasionally, the agency issues a press release regarding a fact finder’s decision.  Primarily, though, press releases announce lawsuits filed by the EEOC (nothing has yet been proven) or settlements of disputed claims (where nothing has been proven and there is no admission of liability).  The agency’s “wall of shame” approach creates unfair negative publicity for employers, some of whom eventually prevail on all counts and others of whom make a business decision that the cost of settlement is less than the cost of litigation.  Perhaps the EEOC feels a need to create the impression of action to justify its huge budget; perhaps there is another equally unsavory motivation.

Third, stop using a “do as I say not as I do” approach to some matters.  The best example of this relates to the EEOC’s April 2012 guidance titled “Consideration of Arrest and Conviction Records in Employment Decisions Under Title VII of the Civil Rights Act of 1964.”  In that guidance the agency asserts at the outset that an “employer’s use of an individual’s criminal history in making employment decisions may, in some instances, violate the prohibition against employment discrimination under Title VII” and then proceeds to outline the EEOC’s enforcement position.  While employers may agree or disagree with this guidance, the EEOC has clearly outlined what it believes the law to be ~ or at least what it believes the law applicable to employers-other-than-the-EEOC to be.  In a case pending before the US District Court for the Northern District of Illinois, the EEOC alleges that Dollar General’s use of criminal background checks has a disparate impact on African-American job applicants.  The EEOC objected when Dollar General sought discovery of the agency’s policies regarding its own use of background checks and criminal history records when making employment decisions.  The court sided with the EEOC on relevance grounds.  Relevant or not, the EEOC should be transparent about its policies and practices.

The Bullard Edge believes in the true mission of the EEOC and hopes that the agency takes the occasion of its golden anniversary to pivot back towards its roots.