Favorite Cases Remembered: The Case of The Time-Thieving IT Manager 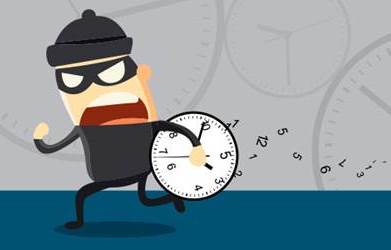 Daylight Savings Time (DST) begins on Sunday.  At 2:00 AM in most parts of the United States the clock will spring forward one hour.  As a result, our Sunday this week will be 23 hours.  The calendar is stealing time from us.

While DST is an altruistic time thief (with a goal of conserving energy and more efficiently using daylight), the idea of a time thief reminds The Bullard Edge of a favorite case from the past.  We will call this The Case of The Time-Thieving IT Manager.  (To preserve confidentiality I am changing a few facts, such as names, places and dates; however, the brazen recklessness of the villainous employee will be presented in full.)  Let the tale begin.

The Case of The Time-Thieving IT Manager

The Pollyanna Company hired Chantelle Lye about 12 years ago to be the IT Manager.  In that role, Ms. Lye was responsible for the smooth running of the company’s computer systems.  She managed information technology, ensured the security of data, and supervised the IT staff.  Ms. Lye told the Pollyanna Company it could rely on her, and it did.

Medical Issues Emerge: In July 2007 Ms. Lye experienced several medical setbacks, with the most significant of these resulting in shoulder surgery.  Following surgery, Ms. Lye missed five full months of work, before returning to a partial schedule only.  The Pollyanna Company displayed patience, but wanted to know when it could expect to see Ms. Lye return to work on a full-time basis and gently pushed her for this information.

Accommodation Granted: In February 2008 Ms. Lye presented the HR Director with a medical note signed by Ewell Feelgood, M.D.  Dr. Feelgood identified himself as Ms. Lye’s treating physician and stated that there had been infection-related complications in her recovery.  Due to the “severity of the infection” he anticipated that it would be 10-12 months until Ms. Lye would be able to resume full time work.  He added that in “all my years of practice” he had “only seen one other patient with as much destruction” related to infection as Ms. Lye.

Following receipt of the Dr. Feelgood note, the Pollyanna Company allowed Ms. Lye to work a part-time and variable schedule without loss of pay.  This continued for the next two years.  During that period, Ms. Lye averaged about 30 hours/week (a 75% schedule) and received full pay.  On a few occasions Ms. Lye’s supervisor spoke with her about IT tasks not being completed; each time Ms. Lye pointed to her shoulder and referred to the medical note.

Parking Problems: In January 2010 security reported to HR that Ms. Lye had been parking in the onsite customer lot, rather than in the employee lot that was two blocks away.  The HR Director met with Ms. Lye, who confirmed the report and explained that because of fatigue related to her condition she was no longer able to walk the two blocks.  The HR Director and several others in management discussed the situation.  From all appearances, Ms. Lye looked healthy; at the same time, she always referred to the note and pointed to her shoulder and this made the company nervous.  It did not want to assume anything based solely on Ms. Lye’s appearance.  Significantly, the CEO, who participated in this discussion (and also parked in the employee lot), was shocked to learn that Ms. Lye was still working a part-time schedule for full-time pay.  They decided to speak to a lawyer to find out what was required.

Let’s Call Our Attorney: I received a call from the HR Director who asked me whether the Pollyanna Company had to allow an employee to park in the customer lot as a form of reasonable accommodation.  That was the extent of my introduction to the factual background.  I asked a number of questions and we began to peel the onion on this situation.  We quickly moved past the parking issue and got to the essence ~ the Pollyanna Company did not believe that the IT department was operating efficiently and attributed that to Ms. Lye’s part-time management of that department.

At my suggestion, the Pollyanna Company decided to ask Ms. Lye to provide it with a limited amount of current medical information related to her availability for work in the IT Manager position.  The combination of the two-year old Dr. Feelgood note and Ms. Lye’s self-reports did not provide sufficient information regarding her then-current fitness for duty and fitness for safe duty, including the anticipated duration of any unavailability for work and/or for particular aspects of the IT Manager position.

Ms. Lye promptly provided updated information in the form of a detailed letter signed by Dr. Feelgood.  Among other things, the letter stated that because of the infection associated with the 2007 surgery Ms. Lye had ongoing symptoms that limited her availability for work.  The letter specifically stated that her January 2010 symptoms included significant pain, chronic fatigue and problems with depression; it also said that Ms. Lye “occasionally” would be unable to work a full day.

Family Leave Request: While this information seemed helpful, it did not respond to the Pollyanna Company’s question regarding the medically-anticipated period of time during which Ms. Lye would be unable to work a full day.  Before the company could request clarification, Ms. Lye submitted a request for 2 months of family leave (full-time leave, not intermittent leave).  Because she had 12 weeks of leave available, the company provisionally designated that period as statutory family leave and requested medical certification, which Ms. Lye provided.

This Seems Strange: This is where things get strange.  Near the end of March the Pollyanna Company received a package in the mail from an anonymous source.  The package contained documents that related to Ms. Lye that raised a question as to the authenticity of the February 2008 Dr. Feelgood letter.  As you recall, that letter (described above) stated that due to a severe post-surgical infection Ms. Lye would be unavailable for full-time work for 10-12 months.

The anonymously-received package, however, contained a different version of the February 2008 Dr. Feelgood letter.  This version simply stated that Ms. Lye was released to full-time work with no restrictions.  There was no mention of infection or work-related limitations or of Ms. Lye’s condition being one of the most dire the doctor had ever encountered.  In addition, the package also included material that purported to show preparations for creating a false medical document.

Without delay, the Pollyanna Company contacted Dr. Feelgood’s office, which reported that it had received the same anonymous information.  His office said that it had thoroughly reviewed its file, confirmed that the “no restrictions” version of the letter is authentic, and adamantly stated that the “post-surgical infection” version of the letter was not signed by Dr. Feelgood.

Termination: The Pollyanna Company let Ms. Lye know that it had decided to terminate her employment for dishonesty unless she was able to provide exculpatory information.  Ms. Lye acknowledged that the note was not authentic, but explained that she had submitted it because she disagreed with Dr. Feelgood’s conclusions and had been attempting to obtain a note that matched her own assessment of her medical status.  The Pollyanna Company terminated Ms. Lye’s employment; she had submitted a forged note and had used that note to steal full- time pay for about two years.

Although it “won” the litigation, the Pollyanna Company still lost.  It allowed Ms. Lye to set her own schedule for about two years, allowed her to work approximately 75% of the time while collecting full pay, and incurred significant disruption in the IT department.

The Pollyanna Company may have been able to avoid this loss if it had done a few things differently.

Stay on top of the interactive process and accommodations granted: Ms. Lye presented the Pollyanna Company with a medical note in February 2008, which note stated that she would need to work light duty for 10-12 months.  Setting aside the fact that the letter was a forgery, upon receiving this kind of information an employer ought to determine whether the requested accommodation is reasonable and if it is not the employer ought to be exploring whether another form of accommodation is reasonable and available.  In all of this the employer ought to be interacting with the employee.  If the Pollyanna Company had done that, it may have taken any of a number of actions: (1) obtained follow up information in February 2008 regarding the scope of the light duty need; (2) granted the light duty accommodation request for a specified period of time; (3) obtained more information at the end of a year or sooner; or (4) determined that light duty would be an undue hardship.

Recognize requests for family leave: In February 2008 the Pollyanna Company decided it would allow Ms. Lye to work part-time.  The time away from work could have been treated as intermittent leave.  If the company had recognized this initially, it might have provisionally designated the time off as statutory family leave, provided Ms. Lye with a notice of her rights, and sought medical certification (if needed).

Call your lawyer: The Pollyanna Company was unsure of the scope of its obligation to provide reasonable accommodation and of its right to seek confirmation of the need for leave.  This uncertainty was a big part of the reason it allowed Ms. Lye to work a part time-schedule for full pay for about two years.  An employer that is unsure of its rights and responsibilities under the law ought to confer with its counsel.  This will help the employer to avoid providing unnecessary accommodations; it also will help an employer to avoid missteps.