Thursday Essay: Jiggery-Pokery Consumes The Senate In The Wake Of Justice Scaliaâs Death

The news broke on Saturday that Justice Antonin Scalia had unexpectedly passed away in Texas.  Agree with his jurisprudence or not, almost everyone agrees that Justice Scalia was a legal giant.  Perhaps the best summation of his nearly 30-year tenure at the United States Supreme Court has been offered by his colleague, Justice Ruth Bader Ginsburg, who stated:

Toward the end of the opera Scalia/Ginsburg, tenor Scalia and soprano Ginsburg sing a duet: “We are different, we are one,” different in our interpretation of written texts, one in our reverence for the Constitution and the institution we serve. From our years together at the D.C. Circuit, we were best buddies. We disagreed now and then, but when I wrote for the Court and received a Scalia dissent, the opinion ultimately released was notably better than my initial circulation. Justice Scalia nailed all the weak spots—the “applesauce” and “argle bargle”—and gave me just what I needed to strengthen the majority opinion. He was a jurist of captivating brilliance and wit, with a rare talent to make even the most sober judge laugh. The press referred to his “energetic fervor,” “astringent intellect,” “peppery prose,” “acumen,” and “affability,” all apt descriptions. He was eminently quotable, his pungent opinions so clearly stated that his words never slipped from the reader’s grasp.

Like both Justice Scalia and Justice Ginsburg, The Bullard Edge has a deep reverence for the institution of the United States Supreme Court and for the role that each of the Justices plays.  Unfortunately, that same sense of duty does not live in the United States Senate.  Political posturing has become a low art form in those shallowed halls.  Before that institution makes a grave mistake, The Bullard Edge offers these four thoughts.

First, when his views did not carry the day, Justice Scalia rarely shied away from explaining to the justices in the majority why he believed them to be wrong.  He was famous for his dissenting opinions, full of colorful description and unblanched disagreement.  Justice Scalia issued one famous dissent last summer in King v. Burwell.  As explained in a June 26, 2015 Bullard Alert, the 6-3 majority opinion upheld a key provision of the Affordable Care Act, ruling that eligible individuals may receive federal subsidies through a state’s health insurance exchange even if the exchange is run by the federal government.  Justice Scalia’s no-doubt-about-it dissenting opinion used the phrase “jiggery-pokery” as follows: “The Court’s next bit of interpretive jiggery-pokery involves other parts of the Act that purportedly presuppose the availability of tax credits on both federal and state Exchanges.”

In reaction, most readers of the dissent asked the obvious question: what is jiggery-pokery?  Apparently, it is a term that dates back at least several centuries and refers to:

Second, jiggery-pokery is a great phrase and aptly describes Congress when it gets political, as the Senate has done in the wake of Justice Scalia’s death.  The very day he died Senators skirmished over the appointment of a successor, given that this is a Presidential election year.  The purported issue is whether President Obama should nominate a successor or whether the nomination of a successor should wait until after the election so that the American people have a voice in the process.  (2012 ring any bells?  But I digress.)  The real battle, of course, is the political concern of appointing a liberal or a conservative.

For fun, let’s try to put names to the following sets of actual quotes.  Here is set #1.â
â
Senator _____: “The American people should have a voice in the selection of their next Supreme Court justice.  Therefore, this vacancy should not be filled until we have a new president.”

Senator _____: “The President is presumably elected by the people to carry out a program and altering the ideological directions of the Supreme Court would seem to be a perfectly legitimate part of a Presidential platform.”

Senator _____: “We should reverse the presumption of confirmation.  The Supreme Court is dangerously out of balance.”

Take all the time you want to think about those quotes and figure out who said them.  Enjoy the following image while you do. 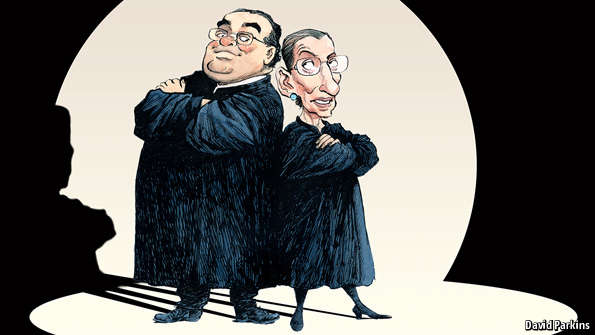 Third, I love the lesson of 1968.  As you all recall, after Chief Justice Earl Warren announced his retirement in June 1968, President Johnson nominated Associate Justice Abe Fortas for the Chief Justice position and Fifth Circuit Judge Homer Thornberry for the Associate Justice position.  President Johnson clearly hoped to keep the Supreme Court as liberal as possible.

Republicans in the Senate opposed these nominations on political grounds.  They opposed the Fortas nomination and ultimately it failed.  The conservatives won.  The next president, who they hoped would be more conservative than President Johnson, would nominate a successor.

The lesson ~ delaying the process is no way to guarantee future outcomes.

Fourth, one of the consequences of an eight-member Supreme Court is the strong possibility of 4-4 deadlocks, especially given that four justices are considered liberal and four are considered conservative.  Our friends at Seyfarth Shaw outline some of the cases on the current docket that might be impacted by the absence of a ninth justice.

In addition, The Bullard Edge reminds everyone about the 2000 decision in Bush v. Gore.  Due to a dispute regarding ballots in Florida, the outcome of the November 7, 2000 presidential election remained in limbo while the courts tried to sort it out.  It was not until after the Supreme Court issued its 7-2 decision in the lawsuit on December 12, 2000 that Vice President Gore conceded defeat the next day.

While it seems unlikely that the 2016 election will end up in the courts, it also seemed unlikely in 2000. It could happen again.  If the Supreme Court remains an eight-member institution, there is a possibility of a 4-4 split along ideological lines.  The potential implications in that for democracy and order in this country are staggering.


The bottom line is that President Obama and the US Senate need to perform their constitutional duties appropriately.  President Obama should nominate a qualified candidate with broad appeal and the Senate should begin the confirmation process without delay.