What Can Employers Do About Gun Violence In The Workplace 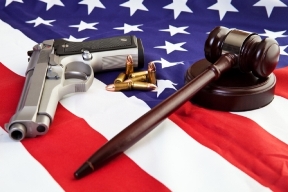 Gun violence is too common in the modern American workplace.  The recent Umpqua Community College shootings bring the issue to the fore once again.  There have been numerous other incidents in recent years and there is no reason to believe that an end to gun violence in the workplace is coming anytime soon.

Almost all of us can agree with this statement: America has too much gun violence in the workplace.

Impact In The Workplace
Gun violence is a workplace reality.  According to the United States Bureau of Labor Statistics, there were 4679 fatal workplace injuries in 2014.  Of that total, 307 deaths were the result of intentional shootings (roughly 6.5%).

Less tangible, though no less real, is the impact that deadly shootings have on survivors, including co-workers at the same employer, as well as workers in other workplaces.  Among the issues that survivors face are how to cope with the grief of loss and how to deal with the fear that a similar incident will claim them, a loved one or a colleague.

Safe Work Environment
Ultimately, employers are people (either owners or management or others making decisions about the workplace).  These people have a variety of views on guns and gun rights.  Whether in favor of or opposed to various types of gun restrictions, these views are real and have the potential to impact decision-making.

Regardless of their personal views on guns, as workplace decision-makers these people must be aware of their responsibility for maintaining a “safe working environment” for employees.  The precise scope of this responsibility is open to legitimate debate.  Some folks cite to case law developed in the context of negligence and intentional tort claims.  Other folks will look to the mandate in section 5 of the federal Occupational Safety & Health Act that employers provide “employment and a place of employment which are free from recognized hazards that are causing or are likely to cause death or serious physical harm to his employees” (this is the so-called General Duty clause).

Policy Choices For Employers
Guns are a reality in American society and it is a reality that employers cannot effectively ignore.  When it comes to guns in the workplace, there are at least three relevant questions.

The point is not that some states have bad laws or good laws.  Rather, the point is simply that there are different laws in different jurisdictions and employers should become familiar with the laws in their jurisdiction before adopting any policy related to guns in the workplace.

Additionally, there also may be situations in which a contract impacts the types of workplace gun policies that an employer may enact.  One example would be a situation in which the employer is a tenant rather than a location owner; in such a case (a) the lease agreement may prohibit guns on the leased premises or (b) the landlord may state that he or she is going to carry a gun when in the tenant’s premises regardless of any rules that the tenant may have adopted.

For some employers, the answer will be clear: adopt policies that, to the fullest extent permitted by the law, ban guns in the workplace.  Depending on the applicable state laws (and there are none in Oregon or Washington) that may mean adopting a policy that bans all guns from all areas of the workplace (including no concealed carry and no guns in cars in the parking lot).

When an employer decides to adopt a nuanced policy (somewhere between having no policy and prohibiting guns everywhere in the workplace), there are a number of factors that an employer ought to consider.  In other words, when deciding how to exercise its policy discretion, an employer should fully consider its objectives and the implications that any particular decision might have.

Employers need to invest in training.  Whether an employer has a flat ban on guns in the workplace, or whether it has a nuanced policy that allows guns in specific situations, training is invaluable.

In addition to communicating its policy to employees (whatever the policy may be), an employer should consider training on that policy.  An employer may also want to provide training on related topics, such as how to recognize potential gun issues and how to respond to a gun situation in the workplace (e.g., where and when to report situations and where to escape if necessary in an emergent situation).

The Bullard Edge encourages employers to carefully consider their policies.  It could be a critical part of workplace safety.